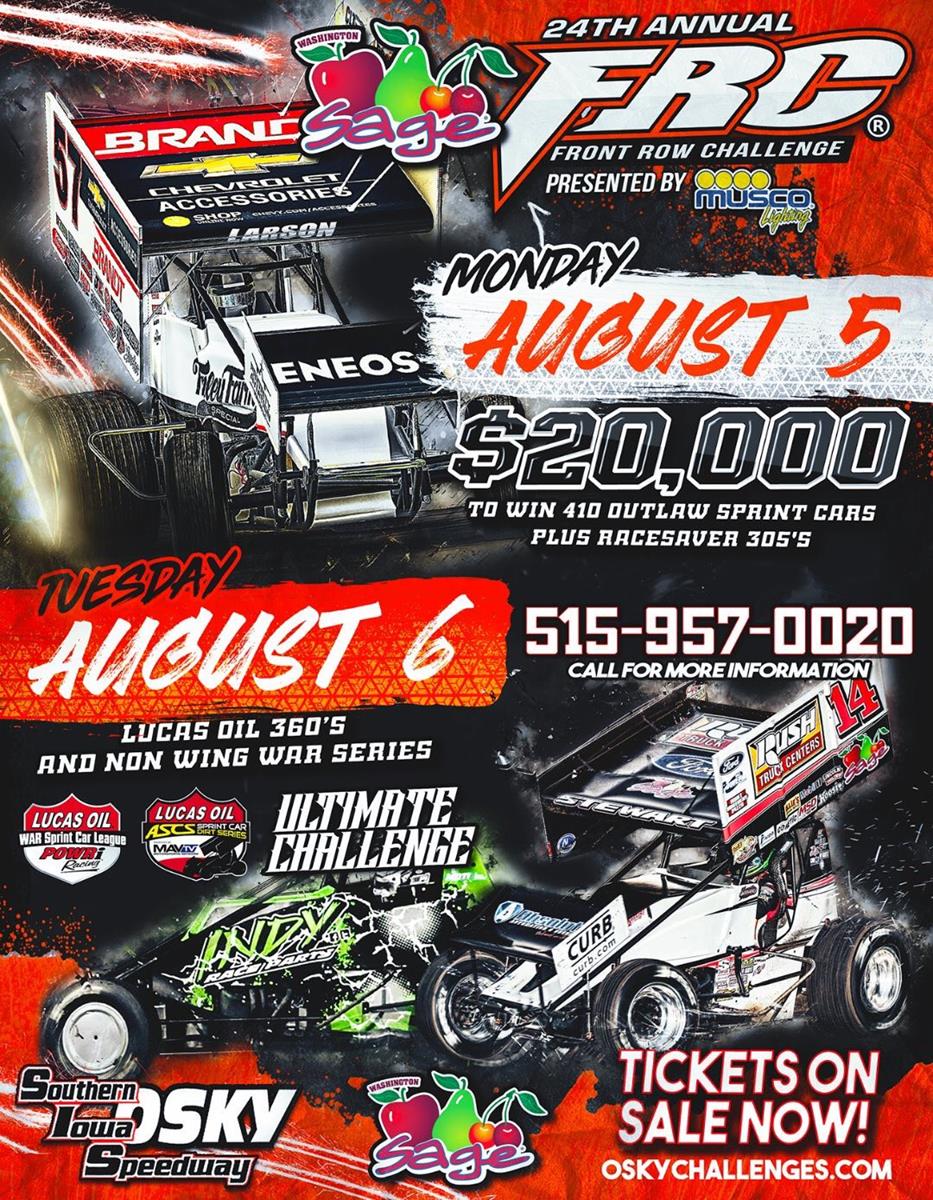 Dallas, TX (July 29, 2019) – The 24th Annual Sage Fruit Front Row Challenge presented by Musco Lighting on Monday, August 5th will see two NASCAR stars joining the always stellar field of sprint car regulars! Kyle Larson and Tony Stewart will both be taking to the track at the FRC looking to hoist the championship belt and the big check at the “one night stand for 20 grand!”

Much like last year, Stewart will drop in a 360 for the Sage Fruit Ultimate Challenge presented by Don Long’s Searsboro Telephone Co. on Tuesday to compete with the stars of the Lucas Oil ASCS National Series. For the second time, the Lucas Oil POWRi WAR Sprint Car Series will be on the card Tuesday night, bringing some wingless flavor to the Southern Iowa Speedway, while Monday night will see the RaceSaver 305s joining the FRC.

“We’re very excited to have both Kyle Larson and Tony Stewart back at the Osky Challenges this year,” said promoter Terry McCarl. “Larson is still the only driver to have won a belt both with and without the wing and Stewart will be there both nights going for his first ever championship belt. Former Front Row Challenge winners Daryn Pittman, Brad Sweet, and Shane Stewart are all confirmed to be there Monday night, as well as both of the Scelzi boys [Gio and Dominic]. Tuesday night we’ll have both Carson Macedo & Kevin Thomas Jr. back to defend their Ultimate Challenge titles.”

Once again, drivers will have the chance to win money and prizes every time they take to the track. “On Monday night, we’ll have the Deberg Concrete Keith Hutton Memorial King of the Hill MAX,” said TMAC. “Four cars on the track at a time, with the winner pocketing a grand. The fastest qualifier at the FRC will earn $500 from Wicked Energy Gum and there will be Hard Charger awards in every class, but the Hard Charger in the 410s and 360s will be taking home a KSE power steering pump. Basically every time you’re on the track, you have the chance to win prizes from one of the great manufacturers and sponsors that support the Challenges.”

Fans in the stands will have the chance to take quite a bit home as well, including some money! “Sea Foam will be throwing out footballs signed by drivers and if you end up with a driver that finishes on the podium, you’ll win $100 for the winner, $50 for 2nd, or $25 for 3rd,” said McCarl. “Plus, as of my last count, we’ll have over 1500 hats and shirts to throw out, as well as over 6,000 Mardi Gras beads!”

McCarl noted that fans should plan to arrive early both nights, especially those that will be partaking in the infield party zone. “People will want to get to the track as early as possible for the infield parking,” said TMAC. “The infield gates will open at 3:00pm both nights and will close around 6:00pm, or when they fill up!”

The front gate of the grandstands will be open to fans at 5:00pm each night, so be sure to arrive early to grab your preferred seat!

Knoxville-style Schoenfeld mufflers will be required for all competitors.

Infield Party Passes will be $25, with children admitted for $5. No vehicles over eight feet tall are admitted in the infield. Production vehicles ONLY, and there is no scaffolding allowed.

You can save $5 on your Infield Party Passes by purchasing them at the Oskaloosa True Value Hardware at 202 1st Ave. East on the square in Osky!
For more information and news about the Sage Fruit Front Row Challenge presented by Musco Lighting and the Sage Fruit Ultimate Challenge, visit www.OskyChallenges.com!