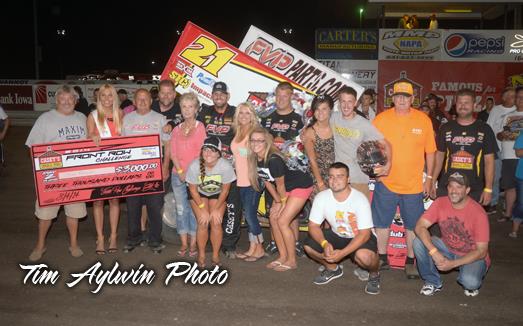 $50,000 1999 champion, Jac Haudenschild, paced the field early in the main event from his pole position ahead of Russ Hall and Wayne Johnson. Brown had moved into fourth by lap four. With six laps completed, Randy Hannagan came to a stop in turn one, bringing out the caution. Haudenschild led Hall, Johnson, Brown and Tony Bruce Jr. back to green flag racing.

On the next lap, Brown moved by Johnson for third, and on lap nine he drove around Hall for second. Haudenschild set a torrid pace as the lead pair hit lapped traffic three laps later. On lap 15, Johnny Herrera slowed in front of the leader, giving Brown an opportunity for the lead that he would capitalize on.

The last half of the race, Brown pulled away, lapping up to the eighth place in a dominating performance. “It’s not often you pass Haud in a higher lane than he is,” said Brown in Victory Lane. “He got caught behind a slower car and I was able to get by. I want to thank the whole team. I want to thank Tony Stewart…he was kind of here helping all night. He’s been watching ‘the Cushion’ the last couple of nights and he is sharp. It’s an honor to call him my friend, and an honor to have him on the team, if it’s only for a night.”

Stewart addressed the crowd after the heat races to a large round of applause.

Loyet took the Front Row Challenge after drawing the pole in a redraw. Due to possible inclement weather, the TK Concrete Keith Hutton Memorial “King of the Hill” match races were scrapped and the redraw was conducted. Loyet received a $1,500 driver’s suit from Hinchman Racewear for taking the challenge. Promoter Terry McCarl also put up $1,000 for Loyet’s top ten run, and he also received an HRP top wing for his ninth place finish.

Cody Ledger, who flipped out of the park in turn two during the first heat race, received John Lemon’s $100 Hard Luck Award. He was uninjured. Hafertepe won a KSE Steering Pump as the hard-charger, while Roger Hall, crew chief for his son Russ, won Mechanic of the Race, and a 3/8 cordless 18-volt impact set courtesy of Des Moines area Snap-On Tools dealers.