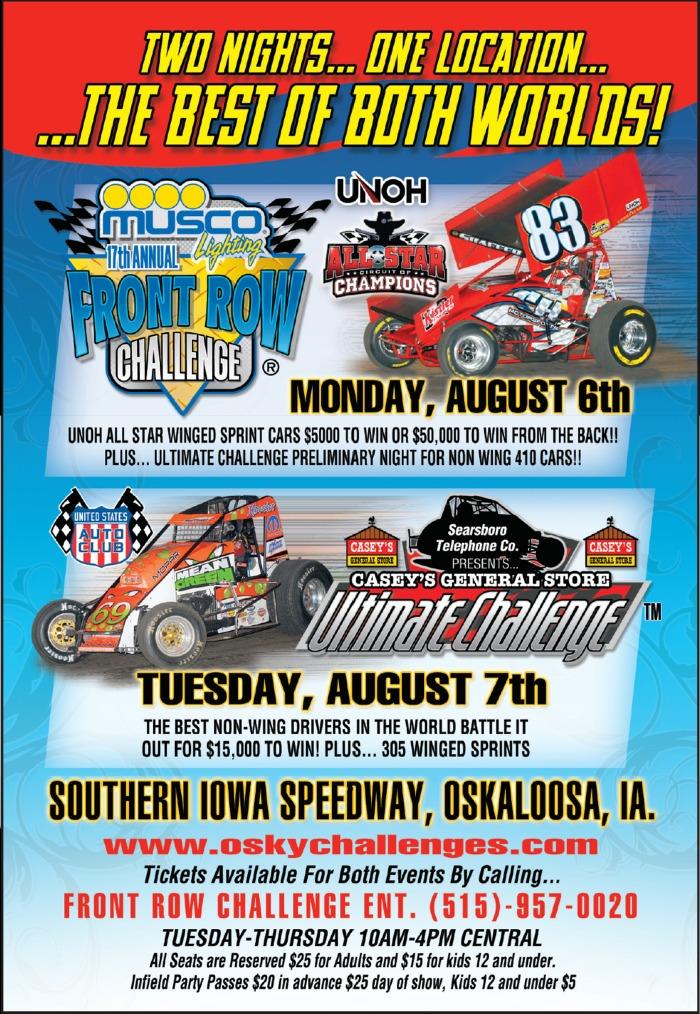 Both events are being held during the Cox Design and Metal Fabrication Inc. Southern Iowa Sprintweek.

Here are quick reference points that every race team and race fan needs to know.

Monday, August 6th – 17th Annual Musco Lighting Front Row Challenge (FRC) featuring a complete racing program for the UNOH All Star Circuit of Champions Sprint Car Series competing for $5,000 to win – or $50,000 to win from the back! And for the first time, the Monday program will also feature a preliminary night for Tuesday’s Ultimate Challenge for non-winged Sprint Cars – so race fans will get a rare chance to see the best of both worlds of 410 Sprint Car divisions on the same night for the price of one! The top two finishers of the non-winged USAC feature will lock into Tuesday night’s Ultimate Challenge feature race. Sammy Swindell has won the FRC the past three years in a row. There are no additional support divisions racing, this is a sprint car-only show.

Tuesday, August 7th – 11th Annual Casey’s General Stores Ultimate Challenge (UC) presented by Searsboro Telephone Company, with the winner of the non-winged USAC Sprint Car feature race taking home a whopping $15,000! A complete program will be on tap for the USAC Sprint Cars; plus for the first time, the Hinchman Racewear Winged 305 Sprint Cars will join the night’s racing program and will run heats and a championship feature. Young Kyle Larson took home the UC honors in 2011, and fans can expect another top-flight group of the world’s best non-winged sprint drivers for 2012. There are no additional support divisions racing, this is a sprint car-only show.

And, this just received at the time of writing: Sprint Car racing sensation Kyle Larson, of Elk Grove California, has also confirmed his intent to race at Oskaloosa both August 6th & 7th.

From Knoxville - Take SR 92 East 20 miles to Oskaloosa. Turn North on North I St. and go 1/3 mile to Fairgrounds.

USAC Non-Winged Sprint Car drivers (racing both August 6th & 7th) will be gunning for a brand new Winters Performance rear end that will be awarded to the top overall combined USAC point’s driver from Aug. 6-7.

The winner of the KSE Hard Charger during the August 6th UNOH All Star Circuit of Champions Sprint Car Series event will receive a KSE power steering pump courtesy of KSE Racing Products.

All drivers at Oskaloosa must run mufflers. The only two mufflers allowed are the Schoenfeld 112535 or 2012 Knoxville-rules muffler Schoenfeld #14272735-78.

Fans can purchase tickets to each of these blockbuster events by contacting the Front Row Challenge Enterprises office at 515-957-0020. The office is open weekly from 10AM-4PM (Central time) on Tuesday through Thursday.

Monarch’s Restaurant in Pella will be giving away (4) $50 gift certificates to lucky fans to their restaurant for dining. Monarch’s is a fantastic restaurant located just 20 minutes from either Knoxville or Oskaloosa. Please click http://www.royalamsterdam.com/cafe.html to get your taste buds motivated for a great tasting meal!

The wildly popular “Infield Party Pass” is sold in advance at Casey’s General Store locations in Knoxville, Pella, Oskaloosa and Monroe for $20 for adults and just $5 for kids. The day of each event you can purchase an Infield Party Pass for $25.

“Safe Ride” from Dingus Lounge to the FRC:

The first bus is scheduled to leave Dingus Lounge at 3:30pm and a second bus will leave as soon as it is full (approximately by 4pm). Then, both buses will shuttle race fans directly to Southern Iowa Speedway for the FRC.

There will also be a second round of bus service at approximately 4:30-5pm departing from Dingus Lounge to the FRC. Visit http://www.dinguslounge.com/ for more information about the Dingus Lounge.

Immediately following the completion of racing events, the buses will depart using the same format returning to Dingus Lounge; with a second and final bus run approximately one hour after the races. So if you want to leave after the race, you can; or if you’d prefer to stay for a while after the races, the option is yours as well.

Round trip tickets are just $10/person. Tickets are only available at the bus upon your arrival on race day.

Please click www.OskyChallenges.com for more information about these two stellar events, including an event poster (link located in the navigation bar towards the top of the page). By clicking www.darinshort.com/osky.html you can view a seating chart for Southern Iowa Speedway.

The best of both worlds are coming to the Front Row Challenge and the Ultimate Challenge August 6th & 7th – don’t miss out on any of the wild racing action!