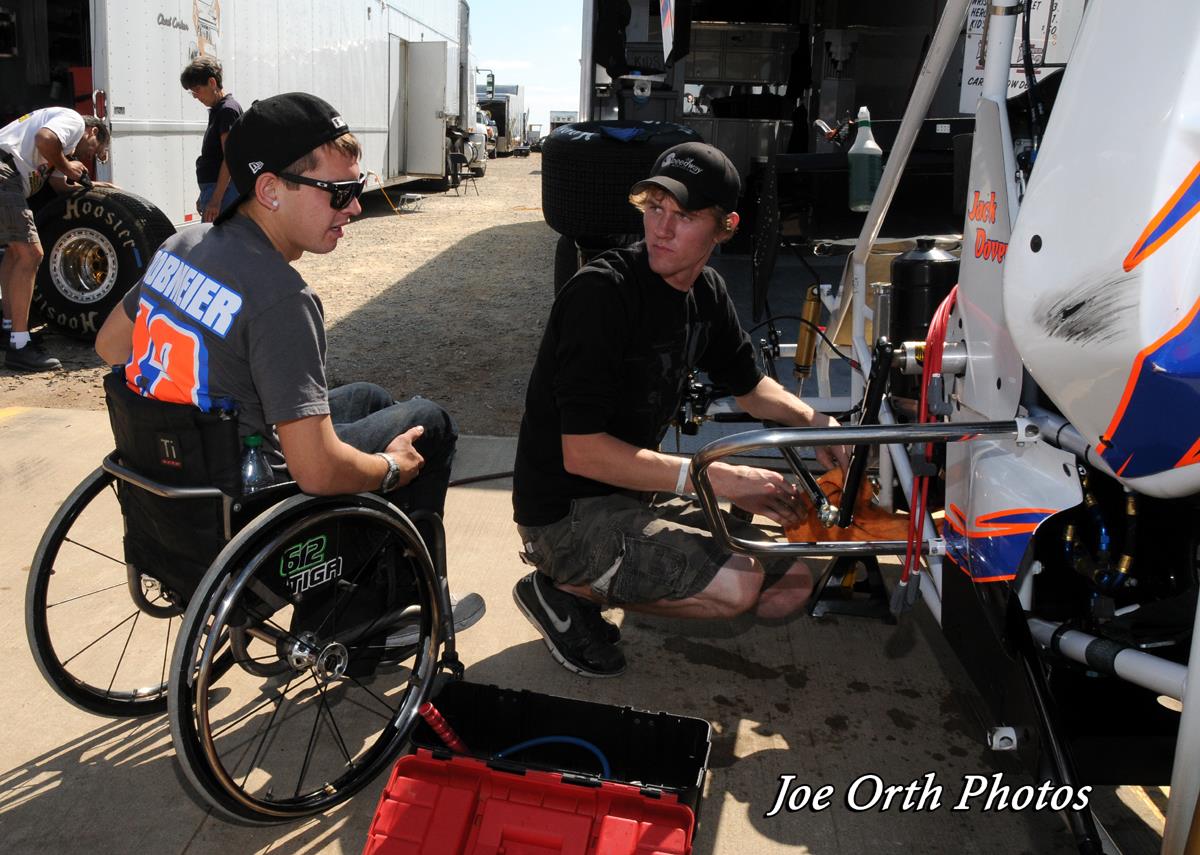 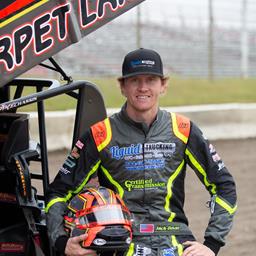 Inside Line Promotions – OSKALOOSA, Iowa (Aug. 9) – It’s hardly the momentum Jack Dover was looking for as he enters the 51st annual Knoxville Nationals this weekend.

In fact, it’s pretty much the opposite for the 21-year-old from Springfield, Neb., who is in search of his first feature at the famed 410 event at Knoxville Raceway in Knoxville, Iowa.

After rallying for top-10 finishes in each of the past two years at the prestigious 360 Knoxville Nationals, Dover began this year by qualifying ninth quickest in his group last Friday. However, he finished fifth in his heat race, which was one position out of a transfer to the feature.

If he had placed in the top four, it would have earned him a spot in the invert for the feature, where he would have started fourth. Dover managed to claim the fourth and final transfer position from the B Main and he was set to start last – 24th – in the feature.

“We were sitting in staging and Tim Crawley pointed over to me, saying that we had a water leak,” Dover said. “It turns out a water fitting was cracked and we couldn’t fix it before the race.

“We had the preheater on and it wasn’t leaking in our pit. It was just a freak deal.”

That forced him to finish last in the feature and his combined points from that night started him 13th in the 15-lap B Main on Saturday. Dover picked off two positions on the second lap and two more after a caution a few laps later. By the midpoint of the race, he’d climbed to eighth.

“I could have used a late caution,” he said. “That’s the best my car felt this year. I could run anywhere.”

Dover got a couple more spots in the final laps to finish sixth – two positions out of a transfer.

He then put in his lone working 410 engine for the Front Row Challenge on Monday at Southern Iowa Speedway in Oskaloosa, Iowa. And, of course, the bad luck continued.

Dover pulled in early from his hot-lap session, qualified 31st and then was forced to the pits midway through his heat race when his car jumped out of gear.

“Coming out of turn four it just popped out of gear,” he said. “I knew it was something in the rear end, so I just came in. It turned the engine quite a bit, so we pulled the plugs and did a leak down.”

The engine still ran fine so Dover decided to race the B Main, which he drove from sixth to fourth to snag the final transfer to the main event. Just like at Knoxville, he started last – 24th. But this time he was on the move from the first green flag.

Dover was up to 15th when the high pressure power steering failed with seven laps remaining. He lost steering and was doused in power steering fluid, so he limped to the pits with a 22nd-place finish.

“The car was really good,” he said. “It could have been a little tighter. And I wasn’t even giving the engine all it had either.

“We’re going to go home for a couple of days, organize everything and head back to Knoxville to see what happens.”

Dover’s preliminary night of the Knoxville Nationals is Thursday with the main events set for Saturday. His best career finish was in 2008 when he placed eighth in the B Main, which was four spots out of a transfer.

For live updates of Dover and the rest of the Knoxville Nationals all week, visit www.insidelinepromotions.com.

Thursday through Saturday at Knoxville Raceway in Knoxville, Iowa, for the Knoxville Nationals

8: Result in the B Main at the 2008 Knoxville Nationals at Knoxville Raceway in Knoxville, Iowa, which was four positions out of transferring to the feature.

Dover was a featured guest on the ASCS Show with Racinboys on June 14 after his win at the Eagle Nationals. His interview starts around 18:40.

He was also on the ASCS Show with Racinboys on June 7. Check out the link below for his interview, which begins around the 6:50 mark.

Here’s a link to some on-board video of Dover winning his heat race at Knoxville Raceway on June 4:

To meet the media relations needs of your team, contact Shawn at 541-510-3663 or sprintcarreporter@yahoo.com. For more information on Inside Line Promotions, visit www.insidelinepromotions.com.