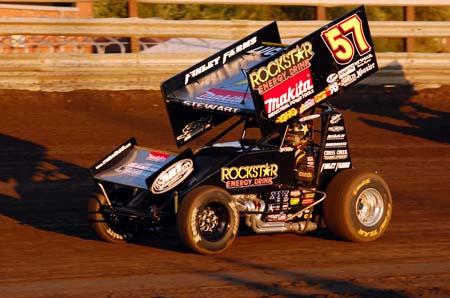 PETERSEN MEDIA: Fresh off of his big 360 Nationals win on Saturday night, Shane Stewart kicked off the biggest week of the year in the sprint car world by charging his ROCKSTAR/Makita/A.R.T. from his 10th starting spot to a third place finish at the Front Row Challenge Monday night.

Stewart was a rocket ship early as he quickly began marching his way forward in the star-studded feature.

Over the first nine laps, Stewart had advanced into the seventh position. A lap nine caution bunched the field back up, and Stewart really turned up the heat.

On the restart, Stewart quickly advanced his Lucas Oil Products/Palmero Properties/Shaver powered entry into the fifth spot, and was pressuring Cody Darrah for the fourth spot when the caution waved again on lap 12.

With the race resuming, the Cross Creek Trucking/Finley Farms/Probilt Construction entry got around Darrah for fourth, and Shane had his sites set on third running Daryn Pitman.

Stewart muscled his way past Pitman on the 18th lap and began reeling in the lead duo of Brad Sweet and Sammy Swindell.

On the 20th circuit, Shane had a monster run going on the lead pack, but the red flag flew on lap 21, stopping the race and killing Stewarts charge.

With four laps to go when the race resumed, Stewart held onto his third position at the stripe, kicking off his Nationals week on a strong note.

“This ROCSTAR/Makita car was awesome tonight,” said Shane. “Being able to run up from 10th like that, and having a car capable of winning against a field like that is a good night. Now we will get this thing ready for our prelim night on Wednesday and see what we can do.”

ON TAP: Up next for the ROCKSTAR/Makita team will be the 51st Annual Goodyear Tire Knoxville Nationals. Shane is set for a Wednesday night qualifying night.

MERCH: Brand new 2011 shirts are in stock and are available in the Shane Stewart booth at the track this week, the Silva Motorsports trailer, or on Shane’s website.

STAY CONNECTED: For all of the latest news on Shane Stewart visit his website at www.shanestewart.com or become a fan of his on facebook at http://www.facebook.com/pages/Shane-Stewart-Racing/116419795041449.